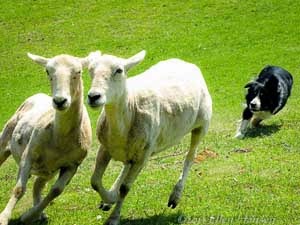 In 2012, the Guinness beer company produced a clever advertisement. In it, a border collie is competing in a sheep dog competition in which the objective is to herd a group of men into the pub on St. Patrick's Day (see Guinness Ad). The commercial has stuck in my mind for reasons quite different than the Guinness company intended, I am sure. It serves as a light-hearted reminder of what is a not so light-hearted reality for those of us who are pastors or parents. Shepherding is tough work. Our goal is to do all that we can to guide the people whom God has entrusted to our care to reach the place of true rest and refreshment. The stewardship that has been given to us is to lead God's people progressively forward into Christ-like maturity against the unrelenting enticements designed to draw Christians away from God and down into darkness.


One of the great encouragements for myself in my calling as a pastor (and as a Dad) is to recognize that this is not anything new. In fact, a quick reading of the very sobering second chapter of the apostle Peter's second epistle reveals to us that there will always be those who, being seduced by sinful desires and greed themselves, will try to draw people along with them. Peter describes them with no sugar coating in the fourteenth verse: "They have eyes full of adultery, insatiable for sin. They entice unsteady souls. They have hearts trained in greed. Accursed children!"  A few verses later, he adds "For, speaking loud boasts of folly, they entice by sensual passions of the flesh those who are barely escaping from those who live in error. They promise freedom, but they themselves are slaves to corruption. For whatever overcomes a person, to that he is enslaved" (vs.18).


Peter doesn't soften his words any more than any one of us would if we saw someone luring one of our kids into drugs or prostitution. The price is too high. The people are too precious. Today, the pimps and pushers of godlessness are everywhere. In Peter's day, like ours, they have even entered the pulpits (2 Peter 2:1). Unashamedly, the truth of God is distorted to justify lifestyles that are anything but godly and to which these false prophets have already succumbed.


It is no little question facing a parent or a pastor: "How do I help move my children towards Christian virtue (Christ-likeness) in a world which is rapidly and aggressively (and successfully) selling godlessness as the greater good?" How do I shepherd my little God-given flock in a time of aggressive attack against truth and virtue? Do I stand a chance to see progress in godliness when what was good not so long ago is now called evil, and what was evil is now called good.


As I stated earlier, this is nothing new. It will be the unrelenting task of all God's people to pursue and to promote Christ-likeness in a fallen world until Christ appears once and for all to destroy the presence of sin. Without attempting to bite off more than I can chew for one blog post, let me at least make this initial recommendation. There is a reason why the apostle Peter describes the thinking and behaviours of those who are the pimps and pushers of sin and corruption. It helps us to know how they go about seducing. (Let me caution us to realize that the pimps and pushers are enslaved themselves and need prayer.) Peter helps us realize what core appeals that they make and that in turn gives us insight into where our kids and our congregations are vulnerable.


From Peter's description, let me give three ways that the anti-virtue agenda advances so quickly. First, they are passionate about their sin. In describing those whom God is ultimately going to judge, the apostle writes: "and especially those who indulge in the lust of defiling passion and despise authority". The word "indulge" is a word which means to "follow after". It is clear from Peter's description that these teachers are not merely debating the possible limits of Christian freedom. They are going for it! They are not dabbling on the fringes of morality. They have jumped both feet into their sinful desires. The apostle describes them this way: "They count it pleasure to revel in the daytime. They are blots and blemishes, revelling in their deceptions, while they feast with you. They have eyes full of adultery, insatiable for sin" (vss. 13-14).


What you and I need to realize then is this: that half-hearted Christianity will never be an appropriate counter for passionate immorality. Our God is not a restrained and reserved God. Our salvation is not a rescue from sin into blandness. We are not defined by cold stoicism. We serve a God who is extravagant in all that He is and does and promises. Just look at the stars in the heavens, and the creatures of the air and seas, and the marvellous complexity of the human body. C.S Lewis was right when he penned these words: “It would seem that Our Lord finds our desires not too strong, but too weak. We are half-hearted creatures, fooling about with drink and sex and ambition when infinite joy is offered us, like an ignorant child who wants to go on making mud pies in a slum because he cannot imagine what is meant by the offer of a holiday at the sea. We are far too easily pleased.” [1]


Second, they are bold and willful. Peter writes "Bold and willful, they do not tremble as they blaspheme the glorious ones." We live in a day and age when the cultural has moved well beyond taking the Lord's name in vain. Anti-god mocking is put on billboards on the sides of city buses all over the Western world. Heretics make millions of dollars confidently spewing their denials of biblical truth in endless book writing and publishing. Talk show hosts scoff when they interview evangelicals pushing them to get with the times and adapt to the age. The anti-virtue movement is not shy and they are not afraid to bully the timid Christian community who is so afraid of appearing "irrelevant".


It is crucial that we understand that the cause of Christian virtue will not be advanced by cowardice. We need confident Christians who love their God and their neighbour. We don't need crazy Christians spewing venom and hate. However, too much pain has been caused by our unwillingness as Christians to present a glorious moral vision for all of life.  The most kind and least compromising man to every live was our Lord Jesus Christ. He embody a life of righteousness and love that showed the dreadful flaws of both pagan immorality and religious self-righteous hypocrisy. He died and rose again to make it possible for a people to rise up who would embodied His character. God does not approve of moral compromise but as the end of the Bible teaches, He doesn't approve of cowardliness, either. Our kids and our churches need to see confidence and courage in the pursuit of God's kingdom and righteousness.


Finally, they promise freedom. This is one of the chief lies of evil. Peter writes that these foes to Christ-likeness "despise authority" (vs.10). He later adds "They promise them freedom, but they themselves are slaves of corruption" (vs. 19).  This is reminiscent of Satan's deceiving of Adam and Eve when he promises them that if they make their own choice independent of God, that they will become like God. God is the only truly free being in the universe. However, even that freedom can be described as limited when you consider that God cannot be untrue to His own perfect nature. God will not in the name of freedom stop being a holy and perfect being. Therefore, true freedom is not indulging our every desire. That is what the pimps and the pushers will tell you. That is what the defenders of prostitution and porn will tell you. True freedom is having your desires transformed. It is having pure, good, righteous, merciful and loving desires, and by God's grace, pursuing them with reckless abandon. True freedom is becoming like God, free to love in purity and goodness and truth. Free to live with justice and mercy. Free of sin. Full of grace and truth.


As a parent or a pastor, we need to understand what it means to be free. We need to understand how the truth "shall set you free." We need to declare that Jesus has come as the new Moses to announce to the enslaving Pharoah called sin, "Let my people go!" Jesus began his public ministry announcing to the people of his home town, : "The Spirit of the Lord is upon me, because he has anointed me to proclaim good news to the poor. He has sent me to proclaim liberty to the captives and recovery of sight to the blind, to set at liberty those who oppressed to proclaim the year of the Lord's favour."


Our people need to see how the promise of unhindered indulgence in whatever sin we desire is what destroys lives, hopes, marriages, families, communities and culture. True freedom is to be like our God. True freedom is to be set free from sin to become truly human, living as new creatures in a new world under a reigning righteous King. That King is Jesus.


Shepherding in an anti-virtue age demands passion, courage, and a determination to truly set captives free.