Sin is an Invasive Species 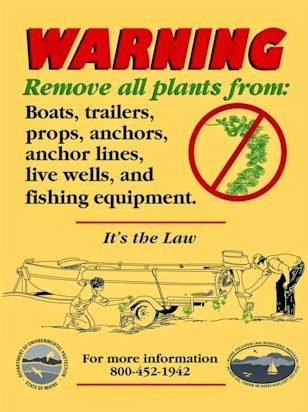 I have a funny memory that serves as a helpful illustration to me demonstrating the invasive nature of sin. Several years ago, I was fishing with a friend in northwestern Ontario and I hooked into a lively fish. As the fish battled with me, I said to Norm "I think that this is a bass." Norm had owned a cabin on the lake for several decades and he replied, "There are no bass in this lake." It was a pristine Lake Trout lake and was known for big Lake Trout and huge Northern Pike. A few seconds later, I looked at the wide eyes of my friend as I held a nice little Smallmouth bass in my hand. That was the first bass that he had ever seen caught in this lake.
Today, the lake is overrun with Smallies. They came in. They took over. They were an aggressive and highly successful invasive species. You can find them in just about every bay and point on the lake. They are fun to catch but it is a whole lot harder to catch Lake Trout now.
In Psalm 19:13, King David prays "Keep back your servant also from presumptuous sins; let them not have dominion over me! Then I shall be blameless, and innocent of great transgression." David knew that sin was an invasive species. He knew that it was a force to be reckoned with! Sin doesn't just occasionally take a bite out of you. With ebola-like destructiveness, sin seeks to consume our thoughts, our energy, our relationships, our personalities, and our time. To use David words, sin settles for nothing less than "dominion" over you. Sin aims to rule without rival.
Another pretty clear demonstration of this is found in fourth chapter of Genesis: "The Lord said to Cain, 'Why are you angry, and why has your face fallen? If you do well, will you not be accepted? And if you do not do well, sin is crouching at the door. Its desire is for you, but you must rule over it." Cain had failed to please God with his offering. However, Cain still had opportunity to make things right. God warns him that the danger was not gone. Sin had stuck a toe into his life but it's desire was for more. It had already begun to fester and the infection was starting to spread. It wanted to rule Cain. Cain must seek to rule it.
There is much written about the doctrines of sin, the depravity of man, and old man and the new man, the need for a new birth and the new creation. All of these are worth extensive and serious reflection. Yet, my purpose here is simply to emphasize the fact that the Bible warns Christians that sin must always be taken seriously because it is by nature aggressive and invasive. That never ceases to be true.
Part of my motivation in meditating on this subject is the sad reality of another incident of a well-respected pastor who has fallen into sin and been removed from ministry. This particular man was fully engaged in ministry and two weeks ago, it seems that he had to be confronted over his sin.  MariAnne and I had visited this church on our sabbatical and had encouraged some of our family who live near this church to check it out because they were traveling so far to attend another fellowship. I don't know or need to know all the details. This has happened often enough for all of us to realize that sin is subtle, progressive, invasive, and deceitful.
The Scriptures make it clear that even Christians need to be conscientious of the invasive nature of sin. David, who prayed what he did in the passage mentioned above, knew that you could be called "a man after God's own heart" and fall far, deeply, and disastrously into sin. The apostle Paul wrote this exhortation to Christians in Romans 13:14 "But put on the Lord Jesus Christ and make no provision for the flesh, to gratify its desires." The apostle Peter used similar language in addressing believers. He wrote "Beloved, I urge you as sojourners and exiles to abstain from the passions of the flesh, which wage war against your soul.[1]" I emphasize Peter's words "I urge you" and "wage war against your soul."
From these passages, it is helpful to keep the following applications in mind:

1. Fighting sin is like fighting terrorist insurgents. It never ends and the moment you think that you want to take a break from the battle the threat will suddenly grow and find a place to gain a foothold.

2. You cannot allow any provision for sin. You can't leave crumbs out or the vermin will invade. You can't momentarily play with the pleasures of sin. You don't get careless with the ebola virus. You seek to eradicate it. The other day, I listened to Ravi Zacharias tell the story of a doctor friend of his who in a medical emergency nicked his finger while working on a drug addict. This late night conversation symbolically reflects many such conversations that have taken place in which people who are supposed to be experts on the Christian life have had to confess what a moment of spiritual carelessness has disastrously done in their lives.  Paul says "make no provision for the flesh, to gratify its desires."

3. The call of the Christian life is to "put on Christ." The joy of the Christian life is to enjoy the fruits of living in the goodness, righteousness, love, and peace of God. It is to walk with Christ and to see just how much God really is loving and good toward those who trust in Him. Since the world markets sinful self-indulgence so well, we are tempted at times to believe the beer commercials. Tragically, for many, the first injection of sin is all that it takes to ruin them. Thankfully, there is forgiveness and restoration for all who will choose another way. In the same Psalm in which David pleads with God to  keep his servant "from presumptuous sins", he has an extensive description of the pleasures and benefits of the ways of God. For example, he writes "The law of the Lord is perfect reviving the soul; the testimony of the Lord is sure, making wise the simple; the precepts of the Lord are right rejoicing the heart."[2] He adds in verse 10, "More to be desired are they than gold; sweeter also than honey and the drippings of the honey comb."
It is hard in a world of instant gratification to live a life of faith. However, the gift of faith is actually the God-given ability to know in advance something of the goodness of God through a relationship with His Son. Faith is a divine awareness by which even the taste of sin quickly turns sour in comparison to the enjoyment of life in Christ. We don't sit in a bunker hoping to avoid sin and temptation through a life of monastic isolation. Instead, "putting on Christ" means to purposefully and prayerfully advance in becoming like Jesus and learning to love one another as He did. Sin is tempting to those who lack a clear passion for Christ. Sin is repulsive to those who have tasted and seen that the Lord is good.

4. Vigilance means prayerfulness. David prayed for God's help to avoid the dominion of sin. Jesus taught His disciples to regularly pray, "Lead us not into temptation and deliver us from evil." Sin cannot ever be taken lightly. Christians must never be cocky. We must pray for God's protection. We must ask for continual deliverance from evil. We must ask God to strengthen our attentiveness and alertness when the siren song of sin slowly and persistently woos us towards the rocks of ruin.

The gospel of our Lord Jesus Christ has secured the victory over sin. This hope is what fuels proactive efforts toward godliness. It never is meant to invite a sluggardly presumptuousness. Let us keep encouraging one another. Let's keep praying for one another. Let's bind the wounds of those who have fallen prey to the enemy and let us watch ourselves lest we be tempted.
[1] 1 Peter 2:11